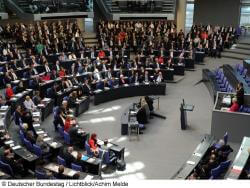 We urgently need an expanded concept of democracy.

Formally, Western states are democracies because they contain the essential elements of democracy, i.e. free elections and majority voting. However, minorities are respected and fundamental and human rights are guaranteed.
Democracy means popular government. But is it really "the people" who are ruling in the parliaments? Or isn't it ruled by what's inevitably prevailing everywhere, namely simply money, sometimes also called the "power of the factual"? A power that forces parliamentarians to make so-called "market-conform" decisions?

In any case: The power of the parliaments is quite limited. As long as the welfare of most voters depends on provided jobs, the re-election of a party or government will also depend on those jobs provided. In this sense, they're open to blackmail. This remains the case as long as the majority of people are so-called employees. The jobs they need as wage earners are not created by themselves and are usually not created by the government. Jobs usually require investment. Capital owners and entrepreneurs in the free economy create these jobs.

No government, however democratic, will come out that way by-passing the capital owners as the owners of jobs and therefore the holders of the power of the factual. Parliamentarians' decisions in line with the market to the advantage of the capital owners are inevitably the result of this constellation. 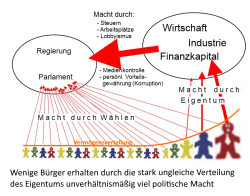 Although this constellation of power may have arisen quite naturally and with a certain justification, it nevertheless poses a considerable problem for democracies. With a wealth distribution as it exists today, in which a few percent of the population holds the huge share of ownership of the Republic, these few people have a disproportionately high influence on the democratically elected state organs considering their small number. It is therefore difficult to speak of a real popular government.

The power of the factual, i.e. that of property, will continue despite of having its justification through the sake of the freedom of the individual. But it also tells us that a fair, i.e. equal democratic claim to power on the part of individuals presupposes participation in this property. Without a minimum of capital and the resulting reduction in dependence on a job provided by other people, democratic participation is not really free and therefore remains of inferior quality. All the people, and all its members, must have the greatest possible freedom of choice if democracy is to have any value. However, free decisions in a capital-driven market economy increasingly require a minimal amount of capital. Only the widest possible spread of property among the people will enable a broad spread of power among the people and will ensure our popular rule.

The democratic claim of every person to an appropriate share of power thus also justifies his claim to a part of the real power, i.e. the claim to a part of the existing wealth of the country. In a democratic state based on the idea of the free individual, this "right to participate" can only be thought of independently of parents and social origin. A general right of inheritance, a public basic inheritance, a mandatory portion for every young adult is the consequence of this demand.

The increasing concentration of capital and thus also of power on a few people is also largely due to inheritance factors. It can only be countered with general basic inheritance, a minimum inheritance claim for everyone, independent of their family origin. 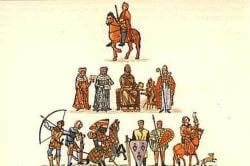 From feudalism to coexistence at eye level

In the almost unrestricted inheritance of material power, feudalism of the past centuries lives on happily.

The basic inheritance on "ARTE"

A minor mistake in the video: The basic inheritance requires 5 % of the annual estate, but not everyone has to give 5 %. There could be high tax allowances, e.g. 400.000 €. 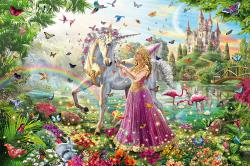 It could become paradisiacal - if capitalism becomes fair for everyone.

more...
What is basic heritage?
blog overview
That's how we implement it