From feudalism to coexistence at eye level 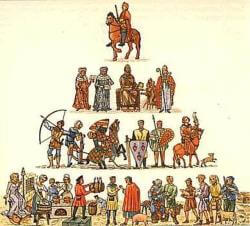 Are all men equal before the law?

Article 3 of the Basic Law of the Federal Republic of Germany claims in any case:

(1) All men are equal before the law


Starting with the French Revolution, hereditary feudalism linked to land ownership has at least theoretically been overcome. Political power is formally no longer hereditary. According to the law, family origin should no longer determine the fate of the individual person. But hardly anyone will deny that it is far from that. Instead of land as a source of power for the financial nobility, socially protected property, i.e. capital, has established itself as the power base for the modern feudalism. What were once fiefdoms are now loans, leases and tenancies, and the heredity of this power has not changed.

If one looks at the fields of action in which we have worked over the last centuries to implement the idea of the principle equivalence of human beings, then one finds that these fields are very differently cultivated: In the area of law, the implementation of equal opportunities seems to be the most successful. Serfdom and slavery have been abolished over the centuries, freedom to choose a career, freedom to travel, etc. have largely been achieved. A right to vote was established, first limited, then a right to vote in classes with different values of votes, then one vote for all men and at the beginning of the last century also for all women. However, the last equality laws for the sexes are not yet old. In the meantime, however, public awareness of equality before the law has become so sharpened that even high-ranking politicians fall under the wheels of justice if they accept gifts, what would just 50 years ago at best have led only to the cheerfulness of the accused .

In the field of education, i.e. free access to the intellectual and cultural treasures that we have to offer to the individual members of the following generation, we are still fighting considerably for equal opportunities. The economic background of pupils as a result of childbirth still has a significant impact on measurable educational outcomes. But this problem is in the political focus of more or less all parties. Whenever we talk about equal opportunities, we are referring almost exclusively to equal opportunities in education.

It is incomprehensible from our point of view that we are doing virtually nothing for equal opportunities in the field of materia, i.e. equipment with real goods. The clan's preserves, with whose passing on in the following generation they determine the one to be masters and the other to be servants, are discreetly excluded in all political statements on equal opportunities. Our inheritance law makes it possible that a person born here is obliged by birth to pay for the place in which he lives to another, possibly his peer, who has not rendered any service for it. Just because he happens to own his apartment as a child of rich parents. This is where the greatest backlog is needed in terms of equal opportunities.

If one assumes that equal opportunities in all three aspects - law, education and materality - is a prerequisite for a successful society of happy people, then a comparison with the law of the minimum propagated by Justus von Liebig in the teaching of fertilizers is entirely appropriate: 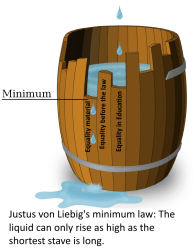 Liebig recognized that of the three main nutrients needed, the least available ultimately determines plant yield. Larger doses of the other, not in the minimum lying nutrients evaporate almost ineffective, until the lack of the one is repaired.

Applied to the development goal of a society of free, equal opportunities and self-determined people, this would mean that further investment in the education system, for example, would be almost pointless if the current main shortcoming were not addressed. This main shortcoming is the extremely unequal initial capitalisation of young citizens. This results from the distribution of the hereditary material within the next generation, witch is either genetically determined or arbitrarily determined by the testators. As a result, large parts of this young generation are put aside from the outset due to their ancestry.

The only discernible way to curb or even overcome hereditary capital feudalism in the future without damaging the idea of property and the market economy would be a minimum compensation between the heirs of each generation. In practice, this can only be done by supplementing our inheritance law with a General Basic Inheritance, which is financed from an appropriate part of the large inheritances.