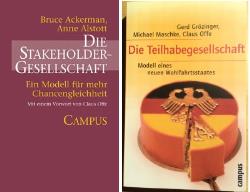 Actually it's about two books, one American and one German. The American one contains a proposal which actually comes very close to our basic inheritance. The German book is the transfer of this proposal to German conditions. The restriction "actually" also applies here. After all, a closer look reveals the diffences. The half-heartedness of the two books is striking and also seems to me to be the reason for their political ineffectiveness to date.

the cover of the book said:

"Every citizen receives $80,000 when he or she reaches adulthood, which he or she can dispose of freely, but for the use of which he or she is also responsible. This sum is his "stake", his share of the wealth of the nation to which he belongs. This stakeholder model against the new inequality provides astonishing suggestions for the reform of the welfare state."

the cover of the book said:

"There is now a broad consensus that the welfare state in its current form is a phase-out model. There is still a dispute about the alternatives. One of the most provocative alternatives is the model of a participating society: every young citizen aged 18 should receive a tax-financed social inheritance of 60,000 euros as starting capital. Thus she or he should be given the chance to be the blacksmith of his or her own happiness. Financing is provided through the taxation of assets and inheritances. The authors have applied the model developed in the USA to German conditions and calculated it."

It lacks clarity, it lacks courage to think

The use of the central term "stakeholder" in the English book is very confusing. The same also applies to the German title "Teilhabegesellschaft". (Participating-Society)
"Stakeholder" has emerged in recent years or decades as a contrast to the term "shareholder", which means the owner of a company. Stakeholders are all those who have a legitimate interest in a company without owning a share of it (employees, customers, business partners, society). So the stakeholder debate is basically also about "hitting on" the shareholder's property rights in some way, or at least moderating his or her arbitrariness. In any case, the term stakeholder does not refer to the owner.
Similarly, for me, the word "Teilhabegesellschaft" (participating-society) does not necessarily imply a community of owners. The shareholders of a company may allow non-owners to participate (graciously, a bit) without concede them the rights of a owner. This is exactly what is happening in the (political) circus of this republic today. We can all participate of this, if we're well-behaved. But the partners say the ropes and makes the deals.

The great simple idea of the proposal of the two books is precisely the real participation through real ownership. So why don't Ackermann/ Alstott call their book "The Shareholder-Society" and the German authors don't call their book "Die Teilhaber-gesellschaft" (society of owners)? Why stay they (consciously?) in the leeway of the stakeholder discussion? Is this not how they counteract their own concerns? Do they not openly dare to formulate the right of every citizen to a share of property in the world in which he was born?

That this reproach hits is demonstrated, for example, by the fact that Ackermann and Alstott have built in a repayment obligation of the "stake" plus interest at the end of life.  Ultimately, what they call a stake is nothing more than a loan for them. They obviously have not realised that this is about a right. Thomas Paine, to whom they refer, was clearer and bolder.

It lacks the right measure, it lacks modesty

"Model of a New Welfare State" is subtitled in the German book. Ackermann/Alstott also see their proposal as a completely new model of society, in which not only a very high "stake" is issued, but also extensive repayment regulations and new taxes are planned, including new pension concepts for old age.

After the fall of the Berlin Wall in Germany, hopefully no one will again try to impose a complete "New Concept" on this society. There can only be steps, steps that are as clear and easy to communicate. Everyone can have a complete vision (without being sent to the doctor), but in reality there are and can only be steps in the desired direction. Some small steps that can be understood and accepted by as many people as possible.

Our proposal for a small inheritance for everyone, which logically must (and can easily, because of its moderation) be diverted from large inheritances, is such a quantitatively small step to be brought to a clear point. No further changes, such as property taxes, repayment scenarios, pension plans, etc. are required. Everything else can remain untouched. Qualitatively it will be a big step, with probably very beneficial effects. A society that grants each member a share of ownership, even small, of the total assets by general right of birth will no longer be the same as the present one. But every further step will have to be left to the next generation, who can then build on their experience with the first small step. That's definitely none of our business anymore. Such modesty is a must.

As a vision, 60.000 € can be considered. That would be about a quarter or fifth of the current arithmetical, average inheritance as a general "right to a compulsory portion". But it is too much for practical political implementation now.  If there should be more later, than the 15 or 20,000 € suggested by us, then the amounts can be adjusted problem-free and steplessly. But to achieve this, society must develop there, also with its consciousness. The realization that the value of the individual is not determined by his lineage and that no testator can live on in another person will have to grow. This society will take the time and the opportunity to experience a basic heritage and we will be granted the time if we want to be successful.

It must also be clear that our proposal for a general basic heritage is not about a "model of a new welfare state", because this is not at all about welfare, but about a right. It is about giving the individual the right to participate appropriately in the world regardless of his or her social background. The rest it usually does on its own, it doesn't need charity.

What is basic heritage?
That's how we implement it
Blog overwiev