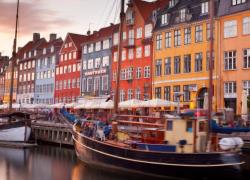 The Bavarians at times use nasty sayings when speaking about the people in their north-easternmost administrative district. Upper Franconia, and especially its areas north of the Main river, were a fringe area of ​​West Germany at the time of the Iron Curtain. The intellectual and economic life of the republic essentially took place elsewhere. The area has not yet recovered from this. Young people being open-minded are prone to migrate.

So can an idea like the basic inheritance, which has the potential to change the world sustainably, even flourish in this province? Where, as it seems, every person who is sensible somehow manages to get away? In a place where every council meeting is fatally reminiscent of Schilda?

We don't know for sure whether the idea can ultimately develop here, but doesn't everyone have to start where they are? With the means he/she has? And shouldn't the remedy be developed where the disease is evident? Together with those for whom it is intended?

We console ourselves: if the Earth is actually round, then its surface has no real centre. For the Earth, all places are equidistant from their centre. For Earth, there is no hinterland and no foreland and also no remote areas. It is the mind and the consciousness that each determine the centre of the world. So it's up to us. 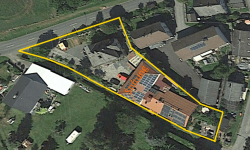 The foundation's house is about 20 kilometres west of the A9. It belongs to an ensemble of three buildings that housed a small weaving mill until the 1960s. Unfortunately, the last heir to these buildings did nothing to ruin the already poorly decorated buildings. As was customary in Upper Franconia but also elsewhere in the 60s and 70s of the last century, the old buildings were deprived of their last charm - with considerable financial outlay. Rotten in the basement we found the former entrance door, a neat carpenter's work with a high arch and coloured glass. It was replaced by a square, sharp-edged aluminium door after the arch had been bricked up accordingly. Windows were replaced by glass blocks, and the outer walls and roof were partly provided with asbestos shingles, which were advanced and "modern" at the time. At the same time, the heir (who was actually nothing more than heir for life) had the roofs of the outbuildings so rotten that considerable water damage was already occurring in the building. Sometimes inheriting does not bring happiness, neither to the bequest nor to the heir. 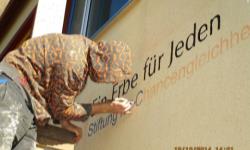 Here in this place, which has lost 20 % of its inhabitants since the turn of the millennium, using the foundation to install new ideas materially, so to speak, is a challenge in itself. And even more so when starting this with run-down buildings and limited resources. It took several years before we dared to write the name of the foundation on the wall of the house. It will take a few more years for the buildings to be in a condition with which one can be satisfied. It is certainly not about turning old buildings into new ones. We have travelled enough to be aware of the living conditions of other peoples. Luxury with moderation is enough.

Impressions from the house