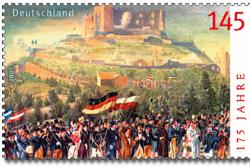 The Hambach Festival of 1832 is seen as a milestone in the first German democracy movement. At that time, 30,000 participants demanded that the power of the princes should give way to the power of the citizens.

In 2013, various local probably exclusively left-wing political groups tried to revive this festival. We found this a good opportunity to start presenting our foundation at the historical location and to discuss the idea of ​​basic inheritance. It actually worked on a small scale, we were even able to give a short speech. There was no serious common ground with the organizers.

What is basic inheritance?
That's how we implement it!
Blog posts